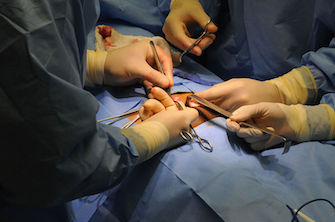 When patients go to the hospital, some of them will find that they get harmed instead of healed. “It could be an infection, medication side effect, wrong dose, unnecessary procedure or a faulty injection,” says Nabil Dowidar, from Alexandria University’s Institute of Medical Research.

The term for what Dowidar describes is an “adverse event”—and the risk of such an occurrence may be much higher in the Arab world compared to the global average, according to Dowidar and other patient-safety experts.

“This is a worldwide problem,” explains Dowidar, “figures indicate this can touch 10 percent of patients.”

Looking at the rate of adverse events in Alexandria during a pilot study, Dowidar found it reached twice the 10 percent global average. But he stresses that rate needs to be verified with more research.

He expected that adverse events were going to be more common in Egypt compared to a much wealthier country, but he was taken back by the size of the disparity. “I was surprised when I got to know the figures,” he says. “The issue is right there but people are unaware, even the professionals.”

But that’s not to say that patient safety is perfect in developed nations either. “The U.S. is not a shining example for Egypt to follow,” says Erica Mobley, the director of communications for The Leapfrog Group, a patient-safety watchdog in the United States.

“Upwards of 400,000 people per year are dying from preventable infections,” adds Mobley, “It’s the third leading cause of death behind cancer and heart disease.” (Those figures come from research published in the Journal of Patient Safety.)

Dowidar thinks the issue has stayed out of the public eye because death or illness in healthcare institutions isn’t a shocking occurrence. If someone dies in a railroad or an airplane crash due to lax safety procedures that is front-page news. But it is less of a surprise when a sick person dies in a hospital, and it’s less apt to invite government scrutiny.

University studies in what is known as “health-services research” has as much potential to save life as the development of a new drug or treatment.

Dowidar is also sure that the higher occurrence of secondary infections isn’t confined to Alexandria alone. “I would guess this is the case across the Arab world, not just in Egypt,” he says.

Others agree. Dr. David Bates is the editor in chief of the Journal of Patient Safety and a professor of health policy at Harvard University. He has worked with the World Health Organization to try and establish the rates of adverse events in different countries. He says adverse events aren’t a uniquely Egyptian, nor Arab problem.

“We found that rates were much higher in developing countries in general,” says Bates, “We also found that the events were more likely to be preventable—the most notable being hand hygiene.”

After his pilot study, Dowidar is now undergoing research to assess the cost of treating patients twice, once for their original illness and a second time for the adverse event.

“For a full financial estimate, we have to consider all the additional costs from the extra days in hospital and also the patient’s lost income too,” explains Dowidar.

To do this, he chose to focus on one particular adverse event—bedsores, which are caused by prolonged pressure to the skin and are prevented by hospital staff making sure bedridden patients frequently change position.

Bedsores aren’t easily treated and can result in death if the infection spreads through the body.

Dowidar’s work involves going to hospitals to find out who has bedsores and taking information from them about their circumstances and condition. Before he began, he wasn’t sure that hospitals would welcome an academic coming in and essentially pointing out their failures—but he found them receptive.

“The hospital administrators didn’t make it difficult, they were encouraging,” explains Dowidar. He says it’s because he approached them from a training point of view, teaching nurses and doctors to properly measure patient safety.

He also allowed the hospitals to remain anonymous—he won’t name them in his studies or interviews with journalists. “I think a constructive and positive atmosphere means things can get better,” he says, “It shouldn’t be about naming and shaming.”

Not everyone takes such a kind outlook. “I don’t think there’s any excuse for poor patient safety,” says Mobley, “There are so many opportunities for hospitals to improve.”

Dowidar isn’t yet exactly sure how much bedsores alone are costing the healthcare system in Alexandria and while he wouldn’t be drawn out on estimates, he did say it would be a substantial amount. He hopes to use the figures, once he’s finalized them, to convince the government the problem is worth focusing on.

Bates and Mobley both agree that the cost of adverse events is staggering.

“Making a conservative guess, it would be billions of dollars in the U.S. alone. Globally, it’s trillions,” says Bates.

The good news is that there are some fairly simple and cost effective solutions. More frequent hand washing, moving patients around to prevent bedsores, and making sure doctors follow evidence-based standards in treating patients. But more important, the experts say, is to do these things on a routine and systematic basis

There are also more costly computerized systems that can be put in place to make sure the correct doses of medication are prescribed—for example an alarm would sound if a doctor tried to administer an adult dose to a child.

While washing hands and moving patients may sound simple enough, the chief change that needs to occur is an attitude change among hospital staff, says Dowidar, and that’s not always easy. It’s about introducing what he calls a “safety culture frame of mind.” He says that drive has to come right from the top of the hospital and permeate through to staff at patients’ bedsides.

In the end, he hopes the cost of adverse events will drive change that helps lower how often patients get sick or die from what happens to them in the hospital.