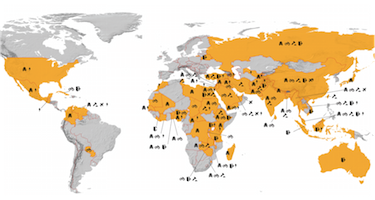 NEW YORK—The freedom of Arab academics to think and express themselves is threatened, a situation they share with many African and Asian colleagues. But the United States, Australia and Japan have also witnessed encroachment on academic freedom in recent years.

That is the finding of a new report released today by Scholars At Risk, a nonprofit organization based at New York University and dedicated to the protection of scholars and their freedom. The report, called Free to Think, compiles more than four years worth of data from the organization’s Academic Freedom Monitoring Project. The report includes data related to NYU’s own faculty.

The evidence behind attacks and infringements on academic freedoms has thus far been largely anecdotal, says Scholars At Risk’s advocacy officer Jesse Levine. “No one was systematically documenting it, so we started the monitoring project. What it tells me is that education is on the frontline.”

The report includes cases of prosecution, imprisonment, travel restriction, loss of position, killings, violence and disappearances. Egypt was one of the only countries in the world to have an incident of each kind reported and verified by Levine’s group.

Scholars At Risk has monitors in the field who report attacks and violations, but those reports were only included if the events could be confirmed by a second source. “We had a great deal more reported incidents than we put in the report because of the challenges in verification,” says Levine.

In countries where it is too dangerous to have monitors on the ground, they employed experts with connections in the country to work remotely.

Between January 2011 and May 2015, there were 333 confirmed cases of some sort of infringement on higher education. Each incident often affected more than one person. “With a military occupation of a university, how many people are affected?” asks Levine. “It has an impact on the entire community.”

The report found a total of 485 killings directly related to academic-freedom violations.

Levine says that just because a country has no reports of violations of academic freedom doesn’t necessarily mean good news. And the report isn’t about ranking the best and worst places for academic freedom. “This is happening in every country,” he says. “Some governments create pretexts to hide attacks on higher education.”

“This isn’t about naming and shaming—we aren’t trying to say any one country is better or worse than another,” he adds.

In March of this year, NYU professor Andrew Ross was prevented from boarding an Abu Dhabi bound flight, which Ross believed was because of his denouncement of the way construction workers have been treated in the building of NYU’s branch campus in the emirate. (See related story: NYU Professor Blocked From Traveling to UAE)

“Our reporting of this incident was no different, and we didn’t face pressure either way,” says Levine. “Obviously we thought it was worth reporting.”

Most of the incidents are perpetrated for the same reason—governments are afraid. “It’s about silencing scholars and shrinking the space where new ideas happen,” says Levine.