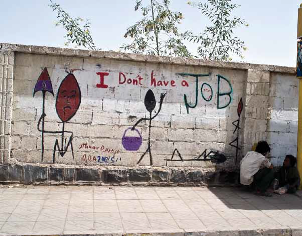 This article is published courtesy of National Yemen, where the article was originally published.

With the beginning of each new year, Yemeni university graduates stand in front of the offices of the civil service hoping to be lucky enough to get a job or to find their names on the lists of people accepted for employment. Hopes quickly dissipate with the lack of job openings compared to the thousands of applicants competing to have a job. Years of suffering, despair and waiting, many young people stand helpless because of the inability of the state to hire them.

Many of those young people get tired looking for jobs. Some of them are lucky and find a job in the private sector, but others find all the doors closed in front of them and remain trapped waiting for public jobs. Mohammed Ala’a is one example of thousands of youth who can’t find a job. Ala’a graduated from Sana’a University in 2000 and received his certificate. “Finally I will get a job and say bye to the difficult days,” he says. Ala’a thought that as soon as he received the certificate would get a job. He was so optimistic in a country suffering from a lack of job opportunities for poor people who have no mediation. After losing hope in a government job, he put his C.V. in numerous private sector offices along the streets of Sana’a in search of work but with no luck. Years passed and he refused to stay at home waiting for a job. Ala’a struggled a great deal to achieve his dreams and ambitions, yet he failed. He eventually accepted work that didn’t suit his qualifications. Today he is a peddler. He bought a wagon to sell boiled potatoes. Ala’a decorated his wagon with his university certificate, telling people, “I am a university student but I ended up as a peddler.” Many university graduates refuse to do the same and spend their time at home, unemployed.

He stopped renewing his registration in the Civil Service Office because obtaining degrees and careers became impossible, especially since there are thousands of graduates ahead of him. Some of them registered 15 years ago and others died without getting a functional degree.

A recent UN report said that unemployment rate in Yemen is the highest in the Middle East and North Africa, reaching 17 percent in 2010. The ratio is over 54 percent among women and 12 percent among males. According to a report, the number increased greatly with the spread of poverty and malnutrition and remained high among adolescent crowds and reached 60 percent after the revolution in 2011.

“The reasons behind this increasing number of unemployed citizens came in response to the effects of the global financial crisis on the labor sector, a lack of new job opportunities, and reduced government involvement in economic activities” the report stated.

Mr. Sa’ad al-Haj, general director of the Department of Information Technology in the Civil Service Office, said that functional degrees are distributed annually in bodies, companies, institutions and the government sector and in accordance with the selection rules, people are selected and chosen on the basis of specialization, age and marks. “We delay some students in getting jobs due to specialization where there is undesirable and unrequired qualification.”

Al-Haj confirmed that they didn’t stop providing degrees, as some say, where the degrees of 2013 will be available but it will be delayed in order to do in some procedures. “We are waiting for the Ministry of Finance to determine the budget,” he said.

Regarding the Supreme Council for Education Planning, there are identifiable causes of graduates’ unemployment, which includes the lack of an appropriate framework for the political development process. The lack of a favorable environment for private investment also impedes job growth.

As a solution, a government report suggested reducing the number of students accepted over the coming years in fields such as education, literature, law and agriculture. In addition, the report advised, universities should develop acceptance policies in line with progress made in Yemen’s development process.

With each period, job applicants seek to renew their career registration in the civil service offices or through web services as a necessary measure for the continuation of their job applications, but that does not lead to anything new for them. Unemployed university graduates keep an eye on the admitted lists for this year with a wish to move from the unemployed lists to employed lists.