Slamming the Door in Syrian Faces

Syrians seeking to leave their country and neighboring countries to reach greater economic and educational opportunity are finding themselves trapped.

Scholarships and other programs seek to build what Syria will need when war is over.

Increasingly, some Arab students prefer universities within the region rather than in Europe or the United States.

Child Brides in Egypt Are Blocked from Education

Emad Shahin says “draconian injustice” prevails as he and over 100 others face capital punishment in Egypt. 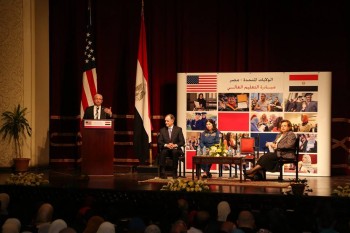 The U.S. is contributing $250-million for a slew of scholarships, academic exchanges and partnerships to support economic development in Egypt.

In the UAE, Calls for Health-Care Education to Expand

The demand for health care education is clear. The question is how to meet it, say United Arab Emirates educators.

Even in Egypt, Syrian Refugees Struggle to Access Higher Education

Some refugees are unable to afford costs associated with getting undergraduate degrees or to pay fees for masters’ or doctoral degrees, leaving them in limbo.

University protests can’t stop antiquities destruction and looting in Iraq as archaeologists struggle to assess the damage from afar.