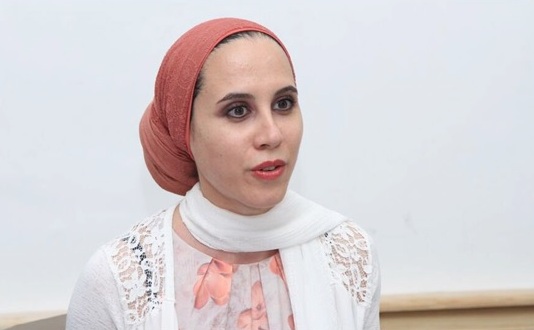 AMMAN—The first thing you notice about Lara Jaber is her wide smile. She smiles almost all the time. On many other people it might seem forced, but with her it feels genuine.

Soon after noticing the smile, though, anyone conversing with her picks up on her quick, penetrating intellect and her force-of-nature desire to convince others about the importance of her research.

Jaber is often in her laboratory at the University of Jordan until the early hours of the next day. She has followed in the footsteps of her mother, Najah Jaber, who was an agricultural scientist at the University of Jordan back in the 1970s, when the campus was still new and had yet to grow into a rambling concrete jungle. Now her mother sometimes accompanies her to the lab. “I help her with the experiments. I’m like a consultant,” jokes the elder Jaber.

Jaber’s research is on a novel subject in the region—biological pest control, or the use of living organisms to stop pests and diseases from harming crops. The use of biological pest control in Europe and other parts of the world is commonplace as a result of the effort to cut down on the use of harmful pesticides. Jordanian farmers haven’t yet made that switch.

“We have conventional agriculture, which depends entirely on chemicals to increase the yield and control pests,” explains Jaber.

This practice, along with mismanagement of the chemicals themselves, can give rise to pesticide resistance, she says.

This isn’t a uniquely Jordanian problem. Khalid Al-Saad, an associate professor of analytical chemistry at Qatar University, has researched the use of pesticides in Qatar and the exposure of farmers to these chemicals.

Results from his questionnaires revealed that just two percent of farmers knew what pesticide they were using. “We know there is serious mishandling of pesticides,” says Al-Saad. “The farmers apply them without an awareness of their negative side.”

Biological control isn’t considered to be important, not even by the university, laments Jaber. “My lectures aren’t even mandatory, so some students might not learn about it before they graduate,” she says.

Jaber’s smile fades when she discusses the uphill battle for her research and lectures to be taken seriously.

She’s investigating beneficial fungi as a replacement for chemical treatments against diseases caused by other fungi and bacteria. Good fungi would kill bad fungi, essentially, eliminating the need for pesticides. She is also experimenting to see if the same beneficial fungi would act as fertilizers and not just disease fighters. Anecdotally, scientists think that crops treated with those fungi have grown taller and greener. She wants to do experiments to measure if the fungi really have such a fertilizing effect.

She coats the seed with the beneficial fungi and then germinates them in sterile soil. Later, she measures the shoot length, root length and the number of leaves. She is comparing plants grown under these conditions with seeds grown without the fungi.

The seeds are of crops commonly grown in Jordan, such as such as cabbage, cauliflower and tomatoes, but the fungi come from Europe. This has made some of her fellow Jordanian researchers critical of her experiments. They worry about a foreign species escaping the lab.

Jaber believes that biological pest control would have a much lower impact on the region’s environment than chemical pesticides, and that her experiments are an important step toward that day.

She uses European strains of the fungi because they’ve been tried, tested and commercialized. In short, they’ve been shown to be safe, she says. “Many colleagues can’t understand this and keep asking me why I don’t work with local strains,” says Jaber. “I’d love to but it would mean I’d have to screen and test them.” Unfortunately she doesn’t have the funding or facilities to do that.

As Jaber moves about in her office, it’s hard not to notice that her outfits are completely color coordinated, with headscarf, nails, and jewelry all working off the same hue. She uses the same attention to detail in her work.

But her colleagues frequently tell her: “This isn’t Europe,” a jibe referring to her time spent studying in Germany on a scholarship with DAAD, the German Academic Exchange Service. “I’m treated like an outsider,” she says.

“Instead of encouraging me, they look for issues,” says Jaber. “They say I’m endangering our national security.” This is something she dismisses and says that if the European strains prove effective then they could one day be used in Jordan’s fields.

Mark Goettel, the editor-in-chief of the journal Biocontrol Science & Technology, agrees with Jaber that it’s unlikely her research poses risks. “There’s an extremely low chance that it would be an issue,” he says.

Goettel is a mentor for Jaber. She e-mailed him out of the blue in 2010 asking for a position in his lab at the Lethbridge Research Centre in Canada. He was about to retire and was not able to take on new students, but out of the many such e-mails he received from eager young scientists, her message stood out.

“She’d done her background research,” says Goettel. “She came with a full research proposal.” Normally Goettel would get people wanting to study with him, but he’d end up trying to find them something to do. But Jaber came fully prepared with her own ideas that were relevant to his lab. “This really impressed me,” he says.

Goettel says he regrets not being able to snap her up, but they’ve kept in touch ever since—meeting at conferences and regularly e-mailing back and forth. She contacts him for advice, especially when she gets harsh critiques from editors at journals she submits her research to. “I’ve tried to coach her on how to reply to these criticisms,” he says.

Goettel says it’s possible Jaber’s go-getting attitude may be misinterpreted. “This new graduate who comes in and wants to publish all the time could seen as a threat and not a collaborator,” he says.

Jaber says she plans to persist. She wants to more widely promote the use and research of biological controls in the region. She is confident that she’ll eventually succeed. “I have a mission. It takes only one mind to spark something, and then it goes on.”