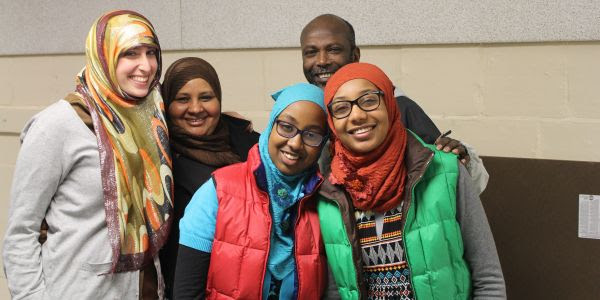 Zoe Gruskin (left), a student at Williams College who took part in a “study away” program in Portland, Me., poses with her Ethiopian host family.

This article first ran in The Chronicle of Higher Education and appears here under an agreement with The Chronicle.

Do students need a passport to get a global experience?

Breaking with orthodoxy in study abroad, some educators have come to believe that the answer is no. Given the diversity of the United States, they argue, it’s no longer necessary to cross national borders to give students the intercultural skills that colleges and employers both prize.

Step off many campuses, and you can quickly find people from other countries and cultures, with different beliefs, practices, and languages. Today some 40 percent of Americans are racial or ethnic minorities, and one in every 10 is foreign-born; just a few decades from now, the United States will become a majority-minority country.

Indeed, shifting demographics are among the reasons that a growing number of colleges have made graduating globally-minded students a priority. Yet the number of Americans who study abroad remains startlingly small — fewer than 10 percent of undergraduates and just 2 percent of the total college population. In recent years, those percentages have barely budged.

Advocates of domestic off-campus programs, often called “study away,” suggest that studying in diverse communities in the United States — among immigrant groups, refugee populations, or marginalized residents — could be another way to gain cross-cultural know-how. And they hope such programs might appeal to types of students who normally haven’t studied overseas, including working parents and those who are the first in their families to go to college.

“How do you make global learning more accessible to all?” asks Neal W. Sobania, editor of a new book, Putting the Local in Global Education: Models for Transformative Learning Through Domestic Off-Campus Programs. “Study away may be that way.”

But other academics, while not dismissing the value of such programs, see them as study-abroad-lite. An experience in a foreign country is not interchangeable, they say, with one in a student’s home culture.

Supporters of domestic study away, however, say that such arguments equate geography with learning. “What matters isn’t place but what happens in that place,” says Larry A. Braskamp, interim president of Elmhurst College, outside Chicago. An expert on student development and learning, he wrote a paper with Mr. Sobania on domestic off-campus study. “Yes, study abroad is a natural place for difference,” he says, “but there’s an awful lot of difference in America.”

Outside the Comfort Zone

The critical piece, Mr. Braskamp and others say, is structuring programs in a way that students encounter and are challenged by varying perspectives.

Mark Engberg is an associate professor at Loyola University Chicago, where he studies the educational benefits of diversity. “To what extent do their experiences push students outside their comfort zone?” he says. “That’s where we see real change.”

Not all programs, domestic and international, are created equal, Mr. Engberg says. If a student spends a few hours in a low-income neighborhood, only to retreat back to the comforts of campus, will real learning take place? Likewise, a student who travels abroad on a short-term study tour (short programs, often led by college faculty members, are the way most Americans now study overseas) and spends most of her time with fellow Americans may not have a transformative experience.

The directors of some study-away programs say they have tried to incorporate such lessons into the design of their programs. Both aWilliams College program focused on immigrants in Portland, Me., and a semester on the U.S.-Mexico border organized by Earlham College, in Indiana, place students in home stays, with families whose first language is not English and who may have fled their home countries.

At Susquehanna University, students enroll in a pair of seven-week courses before and after they do off-campus study to help them prepare for and then reflect on their experience. When faculty members were crafting the Pennsylvania college’s study-away requirement six years ago, they quickly decided that both international and domestic programs would count, says Scott Manning, dean of global programs.

“They wanted to be sure it didn’t sound like the point was travel,” he says, “when the point was to have an intercultural experience.” Each year, about 15 percent of students opt for one of Susquehanna’s domestic programs, in places like Puerto Rico, New Orleans, and a Navajo reservation.

The programs can also be less expensive than traditional study abroad. At Pacific Lutheran University, where Mr. Sobania was director of global education, the average cost of a January-term course overseas is $5,000, while many domestic programs run just a few hundred dollars for travel and housing. That could make study away more accessible for low-income students.

But Elizabeth K. Niehaus, an assistant professor of education administration at the University of Nebraska at Lincoln, says she is uncomfortable with the notion of a two-tier system, where “study abroad is only for rich, white women, and domestic study away is for everyone else.”

In her research, Ms. Niehaus has compared short international and domestic service-learning programs, of four to 10 days, and found differences in student experiences. Students who went abroad were more likely to report that they interacted with and learned from the local community, engaged in reflection, and had greater personal change. While there are clearly benefits to domestic service learning, Ms. Niehaus says, “there is evidence that there is something different about international experience, and that experience is better.

“To say we’re going to solve our participation gap in study abroad through study away,” she continues, “is to ignore those differences.”

Supporters of domestic programs, however, say it’s wrong to view the choice as binary. With such a small share of students going abroad, what’s critical is expanding opportunities for global experiences, they argue. “I don’t see these in competition with each other,” Mr. Sobania says. “They’re complementary.”

Living With Immigrants in Maine:

A Williams College alumnus started this January-term program, in which students volunteer in the schools or with community groups and live with local immigrant families. Portland, Maine’s largest city, is a federally designated refugee-resettlement city, with 55 languages spoken in its public schools. Over seven years, the program’s director,Jeffrey Thaler, a visiting professor and assistant counsel at the University of Maine, has placed students with families from Africa, the Middle East, and Latin America. Mr. Thaler says one student who had also studied overseas told him she was challenged more in Portland “because abroad she felt like a visitor. Here, she was still in the U.S. yet immersed in a culture not her own. It made the experience richer.”

From the City of Angels to the Amish:

Global-studies majors at Azusa Pacific University learn to see their own community through the eyes of minority and immigrant groups. During the program’s Los Angeles Term, students live with host families, intern with local nonprofit organizations, and are required to travel everywhere by public transportation. Waiting at a bus stop in car-centric Los Angeles helps the students, who attend college just a few miles away, better understand the experience of the city’s low-income and minority residents, says Richard Slimbach, a professor who designed the program. Only after their time in Los Angeles can students embark on their Global Learning Term. While some head to far-flung locales like Medellín, Colombia, or Manila, the Philippines, others go to German-speaking Amish communities in rural Pennsylvania. “The connections they make,” Mr. Slimbach says of the students, who each write 50-page papers, “lead to real global learning.”

An Education on the Border”

Earlham College’s border-studies program began nearly two decades ago as a truly international program — students studied immigration, human rights, and globalization from both sides of the U.S.-Mexico border. But with Northern Mexico turning volatile, the college moved the program 60 miles north, to Tucson. Students do field study each week with organizations engaged in issues critical to migrant communities, including elementary schools with large Hispanic populations and legal-aid groups that represent people detained by the Border Patrol. “People in the local community become their teachers,” says Patty Lamson, Earlham’s director of international programs.

Karin Fischer writes about international education, colleges and the economy, and other issues. She’s on Twitter @karinfischer, and her email address is [email protected]