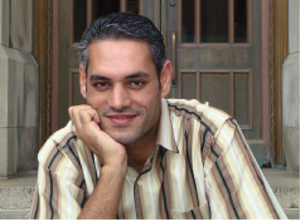 CAIRO—Egypt’s ancient rulers liked gold. They’d take as many gilded objects to their graves as they could muster, believing it would help them get ahead in the afterlife.

The Egyptian prime minister’s new science advisor, Ahmed Gaber, is a man who is interested in the potential of a new golden age for his country—literally. When the prime minister receives research proposals for funding from the public purse, he turns to Gaber. He juggles this responsibility with another role, as an assistant professor of geology at Port Said University.

His academic job involves teaching and using satellite technology to explore what lies beneath Egypt’s desert sands and mountain rocks.

He used to work as a gold exploration consultant for the Canadian mining company, Alexander Nubia. He dresses with more panache than the average scientist, showing up for an interview in a navy, pinstriped and well-tailored suit with a classic watch and white dress shirt. His hair is coiffed and his smile is welcoming.

“The ancient Egyptians did a great job discovering gold, they were great geologists,” says Gaber.

He talks about Egypt’s early geologists with a reserved admiration and a warm grin.

Historians think the Egyptians were the first civilization to mine and use gold on a sizeable scale, which archaeologists estimate began around 3000 B.C.

Gaber says there could still be a significant amount of gold left in the country’s eastern mountains. He also thinks iron and copper could be available in amounts worth mining.

His governmental post is a new one, which he began in January. His job is to consider the proposal and offer an opinion from a scientific rather than political standpoint. “If the proposal isn’t related to my field, I have to do my own research and speak to the scientists about it,” he says.

“I’ve learned a lot from different fields of science in a short time,” he adds, with a gentle smile.

Gaber—though unpretentious in nature—enjoys the prestige of his new post. He says he likes being part of what he calls Egypt’s regeneration after the country’s malaise.

He seems to believe in President Abdel Fattah el-Sisi and Prime Minister Ibrahim Mahlab’s agenda. “If I can borrow a word from President el-Sisi,” he says, “Egypt was in a deep sleep for a long time and now we have to wake up. It’s totally true.”

But the government post still wasn’t enough for him to give up teaching at Port Said, which he does one day a week. He made it a condition of taking the new job, “I prefer to be with the students,” he said. “I told the prime minister that I couldn’t leave them.”

For researchers writing grant applications, Gaber says an applied project focused on solving Egypt’s current predicaments is more likely to be accepted than basic research without specific payoffs. It also helps if the project is relatively inexpensive and sustainable, he says.

Egypt spends 0.43 percent of its GDP on research expenditure, according to the most recent figures from the World Bank. European countries spend a larger proportion on research funding, but Egypt’s spending is similar to the United Arab Emirates and remains one of the largest in the region, as a percentage of GDP.

Gaber was introduced to the prime minister by the well-known and well-connected Egyptian-American geologist, Farouk El-Baz, who led the team responsible for choosing the moon-landing site for NASA’s Apollo missions. (See related story: A Conversation with Farouk El-Baz: Finding Water in the Desert)

Gaber is 38 and just got his Ph.D. three years ago. He confesses he has little experience in government work, but believes he can bring a scientific perspective to the table instead.

After Gaber obtained both his bachelor’s and master’s degrees in geology from Suez Canal University, he went to Boston University’s Center for Remote Sensing for a six-month training program in 2007. That’s where he worked with El-Baz and his research supervisor, Magaly Koch.

The prime minister asked El-Baz for advice regarding practical research that could yield tangible results in Egypt and El-Baz told him the desert and mountainous regions of Upper Egypt were underexploited. El-Baz also told the prime minister that the best person to speak to was Gaber.

El-Baz sees Gaber as his prodigy. “He still asks me questions and advice,” says El-Baz with pride, “But I trust his judgement, he’s efficient, thorough and level-headed.”

Gaber is not the kind of man to offer knee-jerk opinions, explains El-Baz, instead he favors evidence-based science, which is why El-Baz recommended him to the prime minister. “He is deliberate and so he takes his time. That can sometimes be a hindrance, but it’s also a good thing,” says El-Baz.

Koch, like El-Baz and Gaber, uses satellite technology to study the earth. She says that Gaber was a smart, highly ambitious and motivated student. “I was amazed how fast he learned and how passionate he was about his research,” she says.

She was so impressed by him that she wanted to keep him on in the lab. “He is a soft-spoken and very approachable person, highly intelligent, with a good sense of humor and very, very generous,” she says.

Gaber went on to Tohoku University in Japan to get his PhD. He returned to Egypt in 2012, where his satellite readings tell him there could still be a lot of gold in the mountains that flank the Red Sea.

El-Baz agrees with his protégé that there’s gold left in Egypt—though he says it’s impossible to know exactly how much until the digging starts.

The pharaohs may have employed talented geologists, but they didn’t have satellite technology, which meant they might have missed potential gold mines. “Don’t forget about our technological advantage, the exploration today will be totally different than before,” says Gaber.

The Eastern Desert Mountains are part of a geologically old range, which haven’t been disturbed much since they were formed. The Eastern Desert rocks also have very old granite and quartz veins, explains Gaber, which all adds up to ideal conditions for gold formations.

Whether or not fresh mines are dug, Gaber hopes that scientific research in Egypt will help to revive the country.