Lousy Internet Speeds? Not for Researchers in the UAE 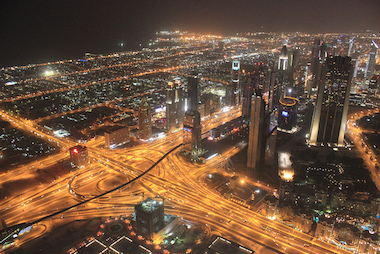 ABU DHABI—Sometimes technology just breathes quietly in the background, and growls with power only when you need it to.

That’s the hope for the United Arab Emirates academic network, known as Ankabut.

The system connects universities and research institutes throughout the emirates to each other via a high-speed backbone of fibers and wires, which also link up to a similar research-focused network in the United States called Internet2.

The network is managed by Khalifa University in Abu Dhabi. But it exists to do more than speed e-mail between civil servants and collaborating researchers. The system’s fibers also hook the universities up to Ankabut’s mainframe computers, which provide high performance computational power.

Different people use Ankabut for different reasons, even if it’s just for a better Skype connection. Once a year representatives of the institutions who subscribe to Anakbut get together and talk about relevant topics such as big data, videostreaming, research collaboration and other ways to use Ankabut’s power in the service of education.

For some, Ankabut is a platform to provide open-source documents and materials to large audiences, for others it’s the ability to access the same files at different campuses. But some computer scientists need the system’s chips and processors to conduct their research.

Any research that involves large data sets can be completed much quicker with a connection to Ankabut. One U.A.E. researcher who is using algorithms to hunt for new drugs says without Ankabut’s high performance, he would have either waited an eternity for his results or gone abroad to conduct his calculations.

“As a rough estimate, I could have run my research on my desktop for 10 years,” says Ranjit Vijayan, an assistant professor in the biology department at the United Arab Emirates University in Al Ain. With Ankabut, this time was reduced to months.

Vijayan conducted drug simulations on Ankabut’s processors from his terminal 170 kilometers away. “I’ve never actually seen the computational hardware and that’s the beauty of it,” he says. He now has direct access to similar high performance computing on his campus, so he doesn’t need Ankabut.

Some academics use Ankabut to conduct high-definition videoconferences with their colleagues, instead of risking freezing images and dropouts on the ordinary Internet. While the average speed of the civilian Internet in the U.A.E. is the best in the Arab world, it is still only ranked 61st globally and connections can be spotty at peak times.

To the participants in the videoconference, it wouldn’t look any different to using the regular Internet, except they would have a less troubled connection. They might not even realize they’re chatting on an education-exclusive network. In fact, only researchers like Vijayan that specifically use Ankabut’s computing power tend to even know about Ankabut’s existence, says the organizations CEO, Fahem Al Nauimi.

“If you ask IT people they’ll have heard about it,” says Al Nauimi, “But otherwise it’s not really important whether researchers know they’re using it. Do they need to know?”

The funding for Al Nauimi’s education network comes mainly from governmental agencies and Khalifa University. Nine years since the project’s beginning, Ankabut is beginning to generate a modest income from member institutions hooked up to the network.

Vijayan’s hopes his computer simulations will hasten the discovery of new drugs for diseases like diabetes, cancers and neurodegenerative disorders.

In the development of a new pharmaceutical, there are thousands of potential variations on the molecular structure. Traditional experiments, which look at interactions between medicines and cells, provide the means to test the effectiveness of a new drug. But they are time consuming and expensive. By running computer simulations of new drug designs at a molecular level, Vijayan hopes to assess the success of a pharmaceutical before sending it to be tested in a conventional lab. “It reduces the burden on traditional research,” he says.

Ankabut is not unique. The U.S. has Internet2 and the UK has the Joint Academic Network, both of which are faster networks that connect a greater number of institutions.

Ankabut may not surpass its international counterparts, despite a $15-million grant from the Emirati government’s ICT Fund, but it is already playing a role in the U.A.E.’s pursuit of a knowledge economy, says the Internet2’s director of global programs, Edward Moynihan.

“It’s a playground for innovation,” says Moynihan, “this platform’s core value is that it’s a place for people who want to make something new.”