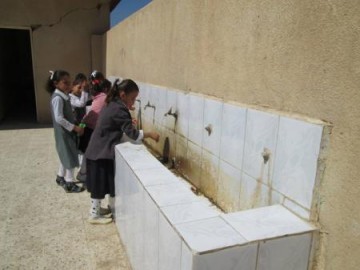 BASRA—At Basra Public Hospital, 8-year-old Ahmed was examined for severe, unidentified lower abdominal pain, which had been troubling him for three months. Eventually, he was found to have severe inflammation in the urinary tract, with the possibility of his kidneys failing.

The reason: His school didn’t have functioning bathrooms so he and his classmates had to go for many hours without urinating, no matter how badly they needed to go.

Ahmed is a second grader in Ashab Al-Hussein Public School in Al-Hayania in Basra, Southern Iraq, which is one of several schools lacking clean, hygienic facilities. The Iraqi Central Authority for Public Mobilization and Statistics found that 26 percent of pupils under 10 years old do not have access to adequate health services in public schools.

“There are no clean bathrooms fit for human use in most of Basra’s schools,” said Hayder Al-Saady, chair of the health committee of Basra Governorate Board, in an interview.

In Basra, students at 334 out of 1437 schools go to school in two shifts. The total number of students in all schools increased from 325,000 in 2003 to 798,000 in 2014, a 20 percent increase. That increase has resulted in overcrowded schools and a decline in health services and the quality of education for students.

“Most school buildings are very old and the allocated budgets for building modern schools are decreasing,” Al-Saady said.

One of Basra public schools (By Nahla Gaber)

School principals agree that their buildings are inadequate. The principal of Al-Hartha School for Boys, in Al Karma Abdel Ghaffar Mashaan Area, said “In our school, for example, there are no hygienic bathrooms, and that is why sometimes children have to leave school in the middle of the day.

Many students go to nearby houses when they need to use bathrooms. Seham Taha, the principal of Al-Shahid Ahmed Ali Al-Malky School, says “After the onset of puberty, girls are often absent from their schools because of the miserable hygienic conditions.”

The Ministry of Health Basra Health Department denied a lack of school health services or the spread of urinary-tract infections and other kidney problems among school children. “There are no official statistics on this issue,” said Abdel Latif, a spokesperson for the governorate.

But Taha said that “The absence of statistics about health conditions caused by this problem does not deny its prevalence. Most students suffer from urinary-tract infections, and most boys are prone to testicular atrophy because of urine retention.” She said that the government has been focusing on poverty or the high cost of living rather than education or the condition of schools.

A sociologist, Star Al-Badran, believes that education does not get enough attention in countries, like Iraq, that used to have high educational levels. “Unfortunately, there is no national plan to develop school education,” he said.  Political turmoil and the economic recession have also decreased the rate of building or modernizing schools in the governorate, he added.

Shaza Al-Genaby, an anthropologist and assistant professor at Basra University, said “It is really shameful to talk about the necessity of providing suitable hygienic facilities, at a time when we still have many issues that need to be addressed, such as developing curricula and teaching methods.”

Some private schools have better infrastructure and adequate health services, but their tuition is not affordable to many of those living in Basra.

Abu Zahraa, the father of four school-age daughters, said “I cannot afford private schools, and public schools have nothing to offer our children but diseases.”

Ahmed is still hospitalized, and his mother does not want him to go back to school, given the deterioration of hygienic services. “I pray for him day and night,” she said, “and I won’t send him to school if services there do not improve.”