Options for Special-Needs Students Are Few at Egyptian Universities 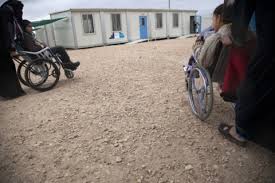 This article is published in cooperation with Mada Masr.

In 1976, Stephen Hawking, a pioneering physicist and research director at the Center for Theoretical Cosmology at Cambridge University, proved that black holes release radiation due to quantum effects. This finding would be later dubbed the “Hawking radiation.” Hawking made his discovery while he was completely paralyzed due to a nervous system defect. He only communicates through an electronic speech-generating device.

Despite constitutional guarantees to the right of education, students with special needs struggle with what are described as discriminatory bylaws limiting their opportunities for university education.

The case of Menatallah Saad is an example of such discrimination.

The 18-year old freshman once wished to join the School of Archeology at Cairo University, but was rejected solely because of her disability.

“I feel the injustice. I can’t study because I don’t know if I will ever go back to my school,” she says, with tears filling her dark eyes.

Born with a physical disability that has complete paralyzed the right side of her body, Saad’s struggle with education started with the basic act of going to school every day.

During elementary and secondary school, her 40-year old mother would carry her to school till she reached sixth grade. She would start her day by taking Saad to class and stay with her all day long.

“I move very early in the morning from our home in Saft al-Laban to her school in Sayeda Zeinab, a 45-minute metro ride, I sit with her in class, I take notes, I take her to the bathroom, then I take her back home to continue studying with her,” the mother says.

Saad then began to learn to walk, after years of expensive physiotherapy sessions.

But the road to her new campus is as bumpy as the one she took to elementary school.

Walking through the unpaved, muddy streets of Saft al-Laban, Saad and her mother have to find a way through the racing toktoks to take a microbus to Cairo University, before working their way to Saad’s classrooms, which is yet another struggle. The mother says both have to take the stairs to reach the classrooms, because the school’s building has no elevators.

“I stay with her all day long, as usual. I have no problem with this as long as my daughter is realizing her dream and getting the education she wants,” she says.

But Saad’s dream may have been too ambitious.

Mennatallah’s father, Saad Heiba, who works as a civil servant in the Giza governorate, says that when his wife went to issue their daughter’s university ID a month after classes started, she discovered that her daughter could not be enrolled due to her disability.

“We were told that students with special needs could not be enrolled in technical schools and that she was accepted into archeology by mistake. The administration said she should be transferred to the School of Arts,” Heeba explains.

“I did not cost the state a penny in her education or the long therapy process she is undergoing, is it also too much for her to join the school she wants?” he asks, referring to the money he paid in private tutoring, which is a financial burden on families, even if public education is free.

The school’s dean, Mohamed Hamza said in press reports that Saad is not qualified to study archeology due to her disability, because some of the courses taught require field visits to archeological sites.

The minister of higher education, who heads the Supreme Council of Universities, issues an annual decree adding and specifying the schools that those with special needs can join. According to Abou Steit, the decree is sent to all Egyptian universities to enforce.

“Some of the technical schools require certain skills that we know for certain that those with special needs cannot manage. It is unfair if we allow them to join schools that we know in advance they will fail in,” he says.

While Saad cannot attend the school she desires, Maha Mahrous, whose son John, 16, is deaf, says her son cannot even dream of crossing the gates into Cairo University. According to the same decree, deaf students cannot join universities at all.

Like Saad, John’s struggle with education started in elementary school. Egypt has special public schools for deaf students from elementary to secondary education, but Mahrous says that teachers at these schools do not know sign language.

“My son is allegedly provided with proper education. But the teacher doesn’t know sign language and speaks to students who can’t hear him. For years, I paid thousands of pounds to sign-language teachers to privately tutor  John,” she explained.

When it comes to university, John has hit a deadlock. “My son is now at his last year of high school and is dying to join university. He just can’t because he is deaf. The country is telling us that my son is inferior to other students,” she says.

For a lawyer at the Egyptian Center for Social and Economic Rights, Mohamed Abou Zekri, decrees preventing students from going to university have no legal basis.

“Both the constitution and international treaties signed by Egypt oblige the government not only to provide equal opportunities for education to those with special needs, but also to provide the tools necessary for them to ease any difficulties that they may face,” he explains.

According to Zekri, these tools include specially designed classrooms, elevators to facilitate easier on-campus movement, books written in Braille for visually impaired students and teaching assistants for deaf students who use sign language and students who have difficulty writing due to disabilities.

“I do not know what the legal basis is for the SCU to issue such decisions. I would recommend referring to international treaties signed by Egypt,” says Zekri, a man with a disability himself. “Egyptian laws are very depressing for me.”

Similarly, a lawyer and founder of the Houqouqi (My Rights) NGO for the rights of people with disabilities, Essam Saeed, reiterates that there is no legal basis for the SCU’s decree. “It is just a government’s administrative decree that is not based on any law or constitution. But it is used to deprive millions of people with special needs in Egypt from their basic right to higher education,” he said.

Egypt’s constitution, which was passed this year, is considered to be a landmark shift in the struggle for the rights of people with disabilities in Egypt, observers say. Article 53 of the constitution prohibits discrimination against citizens with disabilities, while Article 81 obliges the state to commit to the economic, social, cultural, political, educational and health rights of people with special needs. It also stipulates the state’s commitment to provide better public space utilities for them.

Meanwhile, chapter six of Egypt’s Child Law details the rights of children with special needs, which includes the right to receive proper education at the same educational institutions available to other students.

But to commit to these obligations is costly. Heiba believes that a major part of the administration’s rejection of his daughter’s enrollment in the school has to do with the state’s failure to commit to its obligation. “The administration knows that if it accepts Mennatallah, it will have to appoint a facilitator for her. So why do their job? Let them throw her in another school where she is not going to cost them a penny,” he says.

Hawking’s experience is not too far from home. Saad, who sat quietly next to her father for most of Mada Masr’s encounter with the family, said that she wishes to be as lucky as Taha Hussien, the blind novelist, known as the dean of Arabic literature.

“The government paid for his scholarship to France and appointed his brother to be his facilitator while he studied at the Sorbonne. He then became the minister of education and was dubbed as the dean of Arabic literature. Will I ever be like him one day?” she wonders.