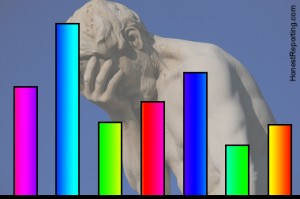 This year’s league table ranks what researchers deemed the 863 top universities in the world. The list includes 29 universities in ten Arab countries. The top performing Arab institution is King Fahd University of Petroleum & Minerals, in Saudi Arabia, ranked 225, down from 216 last year. Then, American University of Beirut is 249, up from 250.

Of the top ten Arab universities, eight are in the Gulf states (four in Saudi Arabia, three in the United Arab Emirates and one in Bahrain).

“Certainly the level of funding available is helping in fueling the ambitions of these universities, which are transforming themselves quickly and are establishing important international collaborations,” said QS spokesperson Simona Bizzozero, in an e-mail.  (See the related article “Are University Rankings Relevant to the Arab World” )

This is the tenth year of the annual rankings published by Quacquarelli Symonds (QS), a British company specializing in higher education research, services and events.

For many years, Egypt and Lebanon were the leaders in higher education in the Arab world. And during the past four decades, Egyptian academics have played a prominent role in building up the newly established institutions in the Gulf states.

But anemic economic performance and bourgeoning population growth have combined to undercut Egypt and Lebanon’s positions as the centers of Arab academe. Gulf state policies have emphasized using money earned from oil and gas to build up higher education from scratch in the hope of someday having economies that would not depend on natural resources.

“We have been seeing a shift in Arab higher education toward a knowledge economy, especially in the Gulf states,” says Hillol Nag, a specialist in comparative higher education at QS. “They know their oil will not last forever.”

According to Nag, Gulf states have used two different approaches in advancing higher education. One approach is exemplified by Qatar, which invited a number of American and British institutions to set up branches on its territory. Saudi Arabia has followed another approach of building up its own universities, but still often relying heavily initially on foreign academics and consultants. (See also “How Saudi Universities Rose in the Global Rankings.”)

Both countries established generous, large-scale scholarship programs to send their young people abroad for degrees. The King Abdullah Scholarship Program, established by Saudi Arabia in 2005, currently pays full study and living expenses for more than 150,000 students, the majority of them in the United States. Almost all return home after graduation, where they help fill the staffs of the country’s rapidly expanding universities as junior faculty members. Because of the program, Saudi Arabia has risen to become the fourth largest sending country of foreign students to America, after China, India and South Korea.

Yet even Gulf state universities suffer from some of the same stodgy conservatism that plagues higher education across the Arab World. “It is still mainly rote learning,” says Nag. “Even in post-graduate education there is often no library research, just lectures and learning from textbooks.”

Arab universities have made some limited progress in moving from a purely teaching role to become producers of knowledge. In terms of the number of citations in international, peer-reviewed journals per faculty member, “Only three Arab universities shine,” says Shadi Hijazi, a Syrian-born business and training consultant now working at QS. Those three institutions are King Fahd University of Petroleum & Minerals, American University of Beirut and United Arab Emirates University.

Those institutional rates of winning citations, Hijazi said, are  “still low when compared to universities in the United States, but they are leaders in the region.”

In terms of efforts to make Arab higher education more relevant to local job markets, Nag says “quite a lot of governments have been moving toward expanding vocational education.”

Despite strong questions over the validity of international rankings, some experts say they are useful in quantifying factors that affect the quality and relevance of higher education.

The QS Ranking compares performance in research, teaching, employability and internationalization. It is based on six indicators: academic reputation (40 percent), employer reputation (10 percent) and faculty-student ratio (20 percent), citations per faculty (20 percent), international students (5 percent) and international faculty (5 percent). This year, 63,676 academic and 28,759 employer responses were used in calculating the results, making the exercise the largest survey of its kind, according to Quacquarelli Symonds. This year’s results of the Times Higher Education rankings are expected to be out later this month.