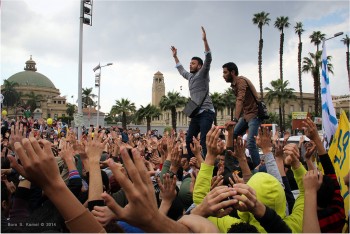 Protests have been a regular feature of Cairo U. life. (Bora S. Kamel)

CAIRO—When the academic year kicks off in Egypt, Cairo University professors and students will face a significant policy shift: Politically-affiliated student activities and groups will be banned from the university’s campus.

That was the decision announced this week by university President Gaber Nassar, according to local news media. It marks the latest in a series of top-down actions that critics say diminish student freedoms.

Nassar told the state news agency MENA that the decision was made as a result of the disruptive and distracting nature of politically affiliated student activities. During the last academic year, campuses were hotbeds of political unrest as students staged perpetual demonstrations that were often dealt with through state security intervention, which led to 16 university student deaths and dozens of arrests.

The wave of protests was initially rooted in anger over the July 2013 ouster of the Islamist leader, Mohamed Morsi, and authorities’ crackdown on political opposition. But the protests spread to include students concerned about freedom of expression and about the state’s use of heavy force against the protesters.

In light of recent violence, some partly agreed with the measure announced this week.

“The principle is not wrong,” said Hany El-Hosseini, an assistant professor in the faculty of science at Cairo University and a member of the March 9 movement, which advocates for the independence of Egypt’s universities. “Partisan activities inside campus mean competition between political groups, and this will inevitably lead to confrontation between different students groups—and this is not the place for confrontation.”

A main concern for some, however, is how the university could enforce the policy. El-Hosseini said that since student groups are not officially affiliated with political parties, the only way the administration could learn of possible political ties would be through security reports, which could lead to a return of state security agents to campus. That would have broader implications for academic freedoms and reverse a 2010 decision to expel government security officers from institutions of higher education. “I fear that this will be a door for the interference of security authorities in universities,” he added.

A Cairo University professor, Mustapha Al Sayyid, shared similar concerns, calling the decision unfortunate. He said it gives university leadership power to decide if associations are linked to political groups—decisions that will exclude discussion with students, he said. “I’m not happy with this kind of statement,” he added.

Lina Khatib, director of the Carnegie Middle East Center in Beirut, said there has been pressure on university administrations to control political movements on campus. Since last summer the government has intervened more in the affairs of Egyptian universities, she said, as it not only views some student groups as potential incubators of violence, but is also more broadly exercising control over freedom of speech.

“Because of these measures, universities are likely to become exclusive and are likely to become spaces that are only hospitable to a certain section of the population, which is the section that is supportive of the government,” she said. “Anyone with a voice that is critical of government policies might find themselves unwelcome on Egyptian campuses and I think this will have a devastating effect on Egypt’s intellectual life more generally.”

Citing the need to make infrastructural on-campus repairs, the government has delayed the start of Egypt’s academic year by two weeks to October 11.

A fiery anti-government movement—Students Against the Coup—slammed the delay as an attempt to quell protests against the state. “Our Revolution continues, both within university campuses and in all liberty squares,” said a statement by the group published on the Muslim Brotherhood’s English-language website. “All public squares belong to the students.”

The group also condemned Nassar’s decision this week, calling it “one of the crimes of the coup,” and said it would not acknowledge the decision, according to The Daily News Egypt.