A Tiny University with a Big Spirit 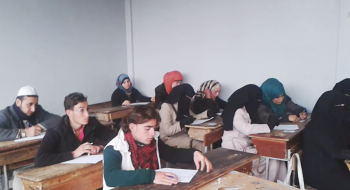 Students at the Free Syrian University.

REYHANLI, TURKEY—Just off the main street of Reyhanli, a lone figure waves from a third-story window, directing the way to an unlikely university campus, which is actually housed in a dingy apartment in the dusty border town.

Inside, Professor Musaba al-Jamal welcomes his guests and details how he wants to save Syria’s “lost generation” by using education to sharpen the minds that will, in turn, rebuild the shattered country once the war is over.

“This isn’t revolution by guns but revolution by learning,” said al-Jamal, the founder and director of the Free Syrian University (FSU), a politically independent university.

Al-Jamal’s claims may be regarded by some as grandiose but the situation the professor is responding to is dire.

Before the conflict in Syria broke out in early 2011, 15 to 20 percent of Syria’s urban population held at least a bachelor’s degree. But the escalating conflict and the displacement of 10 million has meant many young Syrians had their academic careers interrupted. With the war now dragging on into its fourth year, the problem has become chronic and the pressure to educate those displaced by the conflict is increasing.

The Free Syrian University is one man’s response to this problem: It’s a small institution trying to create a place for displaced young people to continue their studies. While the university fees are set at $280, those who can’t afford it get in for free, which is the case with most students there.

The university was founded in October 2013 and began classes the following month. The university now offers classes to just 32 students in the apartment with the remaining students—around 300, according to al-Jamal—learning online, many from within Syria. Al-Jamal’s initial hope was to build a true campus in Reyhanli but there were legal issues, a common experience among aid organizations and workers assisting Syrians inside Turkey.

The university teaches a variety of subjects including law, economics, politics, psychology, media, international relations, technology and Sharia. In the absence of financial support, classes cost a nominal amount. “I have funded the university until now,” said al-Jamal. “We ask the students for $280 for each [semester]. When I have money, I put it (back) into the project. We pay the teachers and our expenses—we support ourselves.”

The majority of students are unable to pay and he estimates that only about a quarter of students contribute financially to their education.

For students like 20-year-old Muhammad Mozakli, the opportunity to resume learning was nothing short of a miracle. “I was a student at Aleppo University and was arrested by the regime at the campus—they released me a couple of years ago,” he said. After his release he fled to Turkey with his family. “I tried to join a Turkish university but it is difficult with the language,” he added.

Education is important to the Mozakli family: Muhammed’s father was a banker in Syria and since arriving in Turkey, his two younger daughters have enrolled in middle and high schools. Having allowed Muhammed’s education to lapse for two years, his father then discovered the free university and they came to visit the campus together. After examining the curriculum and teaching methodology, Mohammad signed up to study technology.

Currently, 14 classes are taught per week at the school, shared between 28 professors. One of those, Abu Muhammad, is a former history professor who now teaches international relations. He says he finds teaching online different but equally rewarding. “The students love that they have been able to resume their studies,” he said. “The problem is, will the world accept the university? Nobody wants to help us.”
Al-Jamal is frustrated by that lack of acceptance.

“I am a Syrian teacher, it is a Syrian university and the books we are teaching are international books—all things are normal except the building because we are a ghost in Turkey,” said al-Jamal. This results in a funding shortage and a lack of transferability and recognition for the qualifications the students are getting, he says.

Ali Ibrahim, 19, from Aleppo, who is studying in law at the free university. One of the handful of students who attend classes in person, he knows that without the university’s receiving accreditation, his future plans are likely to stay out of reach. Yet he attends class eagerly anyway. “Since I was a kid, I dreamed of being a lawyer in the future,” he said. “My father is very proud (that I am studying). I want to be a judge like my dad if I can in Syria.”

The failure to get transferable credit is just one of myriad problems that exist for these university-age students who have been displaced by the war. Keith Watenpaugh of University of California, Davis, and his team of researchers are currently in Turkey conducting a study on the issue. They were previously in Jordan and Lebanon and see similar trends in each location. Transferability of qualifications, both from Syria, and those obtained in bordering countries, is a huge problem, he says.

To gain entrance to a university, young people must take exams in a location administered by the government. This has seen students being forced to travel across frontlines and to break out of besieged areas, like Yarmouk camp in Damascus. “The Syrian regime in Damascus is holding the safety of these young people hostage by not allowing them to take exams in areas of relative safety and that is wrong,” said Watenpaugh.

This also means that potential for Syria’s reconstruction is being squandered, the end report by Watenpaugh’s team said, and that many young people’s lives are being wasted.

“They are the human capital that will be critical to the rebuilding of the Syrian society after the conflict has ended,” the report said, “and they will have an even more crucial role to play as a modern and moderating force in confronting the religious intolerance and ethnic hatred that increasingly defines the war in their homeland,”

It is too early to gauge the success of the program. But what the free university lacks in a traditional campus or international standing, it makes up for in spirit. Abu Muhammad’s eyes well up as he explains what his job teaching history means to him: “I left my future and future of my child, I left everything I have to build a new generation—this is the next revolution.”