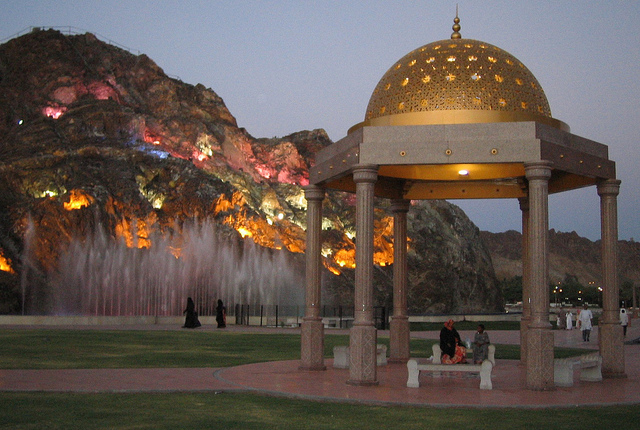 IBRA, Oman—The young women who attend A’Sharqiyah University in Oman wear black abayas, an obligatory custom in this conservative country at the mouth of the Arabian Gulf.

Occasionally, however, a gust of wind reveals a glimpse of a colorful dress or Western-style blue jeans and high heels under the black cloak.

The fashion clash is a metaphor for what’s happening at A’Sharqiyah and a host of other universities that have sprung up in recent years in Oman under a plan to educate young women for free.

Founded in 2009, A’Sharqiyah is typical of the policy. Around 100 miles south of Muscat, the capital of the desert sultanate, 90 percent of the 1,300 students who attend the school are female.

Most of the young women at A’Sharqiyah and other new Omani universities receive free tuition because they’ve passed a year-long English course called the Foundation Program that’s part of a new national Strategy for the Advancement of Women. Adopted by Oman’s leader, Sultan Qaboos bin Said Al Saidan in 1988, the strategy aims to reduce discrimination against women and promote their participation in the workplace. Courses in degree-granting programs in Oman are conducted in either Arabic and English, depending on the university.

The efforts have influenced more than the students’ sense of style. In my Foundation Program courses, the daughters of taxi drivers study and drink tea alongside the daughters of government officials, breaking down class barriers that have long stratified Omani society.

“By going to the university here I’ve made new friends I wouldn’t have made if I had only stayed home and worked in the garden,” said 19-year-old Intesar.

Today, roughly half of Oman’s 80,000 students in 62 higher education institutions are now female. Because two-thirds of male students drop out before finishing their studies, student populations at universities like A’Sharqiyah are overwhelmingly female and a whopping 60 percent of Omani graduates nationwide are women, according to an article in the Journal of Educational and Instructional Studies in the World.

A’Sharqiyah University student Jawahar, 20, illustrates the trend. She’s already contemplating what to do after she graduates.

“I really want to be a teacher, so I’m studying computers,” she said. “My degree will help me support my family after I get married.”

Of course, as in American and European universities, there’s friction between the old and new at A’Sharqiyah.

Eman, 20, grew up in her father’s hometown of Sharjah in the United Arab Emirates, but her mother is Omani, so she took advantage of the government-funded education here. When she arrived in Oman, she thought it seemed backward compared to Sharjah, an oil-rich hub for culture and the arts in the Arab world.

Following Omani customs, the lives of female students at A’Sharqiyah University are highly regulated. The young women must live in dorms with more than 200 students. A male sentry guards the dorms’ locked steel doors, making sure students don’t leave. At 7 a.m., a bus drives the women to their courses. The students walk the 20 feet from the steel door to the bus under the watchful eyes of a male guard.

Reflecting centuries of gender separation, female A’Sharqiyah students also practice self-imposed segregation from their few male classmates—women on one side, men to the other. The two sides rarely speak to each other.

“When I first came here, I wasn’t happy at all,” says Eman, sipping tea. “They keep us in the dorms, and I am not from here so I wasn’t used to that. But because I carry Omani citizenship, I get the vouchers so paying for the university is very cheap compared to back in the Emirates.”

Like Jawahar, Eman is gearing up to take advantage of her education. She’s pushing her own educational goals, which contradict her mother’s wishes.

“She wants me to be a teacher, like my brother’s wife,” she said. “But I want an engineering degree, because I will make a lot more money working for an oil company than I would teaching school.”

Other students are having a harder time with the transition to university. Often separated from their villages for the first time in their lives, many students feel lonely, stressed by their academic demands.

“I hate the long time in the classes,” said Iman, an 18-year-old who hails from a tiny rural village in the desert sultanate.

Others complain about their strictly regulated lives.

“The girls are often in my office complaining, which you would expect,” she said. “But if you really listen, you start to understand how difficult the transition to college life can be for them. Sometimes it’s little things, like they don’t like their shared rooms or having to cook their own food and having to wash their clothes. But last week, after I talked to one girl, I realized that the girls have to schedule a visit to a doctor a week in advance because there is only one day a week they have transportation to the hospital.”

Sometimes, symbolizing the slow-but-steady transformation that universities like A’Sharqiyah have wrought in Oman, an older village woman shepherding her camels and goats across the street will block the bus’ path. The driver will blow the bus horn impatiently to hurry up the procession. And as the driver and students watch from the bus windows, the shepherd usually takes her time.

Sipes teaches English in the Foundation program at A’Sharqiyah.