A Window Into Iraqi Universities 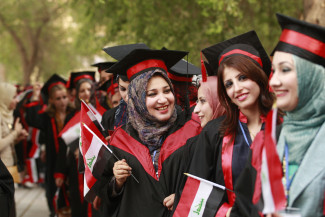 Accreditation may seem like a remote, theoretical and irrelevant concept in war-torn Iraq. But Ali Mohaimen, an Iraqi student, is keenly aware that his country’s universities are not internationally recognized.

“My brother travelled to the U.S. He was told he needed to pass an examination to accredit his diploma,” said Mohaimen, a 21-year-old studying political science at Baghdad University, Iraq’s flagship public higher education institution. “This is not fair. We are spending four or more years under huge pressure—a hard life with very bad security—to be told when we want to achieve our dreams abroad that our certification of graduation can’t be adopted.”

A handful of Iraqi universities are slowly making their way through the accreditation process of organizations like the U.S.-based Association to Advance Collegiate Schools of Business and the New England Association of Schools and Colleges. In the United Kingdom, the British Council is also trying to encourage partnerships where British universities would recognize Iraqi academic programs. While those processes are expected to take a few more years, it’s been important to the country’s rebuilding process, said Mostafa Al-Khazraji, spokesman for Iraqi’s Ministry of Higher Education, which wields significant control over the country’s universities.

“Iraq aspires to benefit from the U.S. to develop an educational system according to the latest international academic experience,” said Al-Khazraji.

If Iraq universities became accredited that would mean foreign universities would be more likely to give Iraqi student scholarships for subsequent study or let Iraqi students visit on student exchanges. Nearly 19,000 Iraqi students now study abroad on a variety of scholarships—providing a crucial source of new skills, Al-Khazraji said. About 10 percent of them go to British universities. But few foreign students attend Iraqi universities, preventing cross-cultural exchanges and the steady stream of outside funding they often provide. Of course, security and safety issues are also a concern for foreign universities considering sending students to Iraq, but the accreditation of Iraqi universities would still be a step forward toward the day when they might receive as well as send students.

For many Iraqi academics, accreditation is psychological. It’s a chance to invest in higher education to try to reclaim the nation’s mantle as what was once one of the more intellectually advanced countries in the Middle East.

“It’s so positive to be accredited by U.S. and U.K. higher education associations,” said Yasir Hamodi, a computer science professor at Baghdad University. “Iraq spent a long time busy with war and embargoes. During that time, Iraq neglected education and culture.”

Baghdad University, Al Mansour University, Al Mustansiriya University, and University of Basra are now trying to accredit their business and management programs with the Association to Advance Collegiate Schools of Business, a Florida-based group, said John Kooti, business dean of Shippensburg University in Pennsylvania. Kooti has traveled to the region five times since 2012 to work with the schools on their accreditation applications as part of a United States Agency for International Development program to improve Iraqi higher education, although it appears this program is ending. (The Washington offices of U.S. AID did not return phone calls.)

The Iraqi universities are examining and revamping their curriculums, professor-to-student ratios, administrative policies, and infrastructure, including classrooms, laboratory space, and information technology. All of this assessment is to find whether the Iraqi programs are in step with other management programs around the globe. The process can take as long as five years under the best conditions. Even though Baghdad University has a brand new campus, it needs to spend significant resources on bringing its programs up to snuff, Kooti said.

“In terms of competitiveness in the world, they have to think outside of Baghdad and Iraq,” said Kooti. “They think of themselves as the university in the Middle East. But now they are kind of behind.”

Accreditation is designed to help universities find their identities, said Robert Reid, chief accreditation officer for Association to Advance Collegiate Schools of Business. The association has around 1,300 institutional members throughout 85 countries, including many in the Arab world but none in Iraq.

“What are they trying to be and what are they trying to become?” he said. “Everything flows from that foundation. Accreditation is really based on the management of students and faculty, the impact that the business school has on the stakeholders and the people they work with and their ability to innovate and provide high-quality programs.”

Americans who have journeyed to Iraq as part of accreditation say they gained a new perspective on the issues that Iraqi universities face. A Shippensburg University finance professor, Sarah Bryant, saw how Baghdad University’s business program was struggling to teach entrepreneurship in a country where central planners have ploughed resources into the public sector and let the free market wither on the vine.

“The head of the Iraqi Stock Exchange complained that students don’t learn about private finance. I found that to be true. The students had no clue about what a stock in a company meant,” she said. “Most are trying to work in government. That is the primary employer.”

Others have seen similar growing pains.

British administrators and faculty therefore usually need to visit Iraq—often a dangerous proposition—to make sure their programs will mesh with those at Iraqi universities. Thirty-five universities have created the British Universities’ Iraq Consortium, which seeks to promote links between the two countries through grants, scholarships and other incentives. But no formal partnerships have been forged.

He noted that the Iraq’s Ministry of Education has spent millions on building Baghdad University’s campus. They have had less luck attracting talented faculty who might develop a new curricula and inspire a new generation of Iraqi students. “They’ll build a facility,” said Law. “But they haven’t got a group of young, internationally minded academics to make use of that facility.”

Ministry officials can also inadvertently hamper schools seeking accreditation, said Robert Moore, the deputy to the provost of the American University in Iraq, in Sulaimaniya, Kurdistan. Moore is overseeing the American university’s accreditation effort with the New England Association of Schools and Colleges, or NEASC. He’s often trying to satisfy the association’s requirements while also adhering to Iraqi government regulations that he believes are more of a nuisance than good policy.

“They overreach,” said Moore, referring to the ministry. “They encroach on our ability to be independent and reach the standards NEASC requires.”

He expected the university to obtain accreditation in late 2018. Right now, he’s trying to find a better archiving system for many university records. Americans take those amenities for granted, he said. In Iraq, they’re a daily struggle, even for a school founded in 2007 by Barham Salih, a prominent and wealthy Kurdish politician.

As a private institution, the American university is especially eager to obtain accreditation to bypass the Iraqi government. The Kurdish regional government recognizes the institution, but Baghdad doesn’t. That’s caused headaches for students from the university wishing to go on to graduate school in Germany, the United States, or other countries.

Amid continuing sectarian violence, political chaos, and economic stagnation, accreditation may seem like a low priority to some Iraqis and others who care about the country. But others see it as an important steppingstone that could eventually ease the isolation of the country’s universities and raise the quality of their graduates.