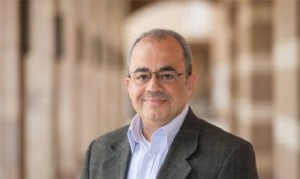 “It’s unbelievable because this is one of the most loved, most popular professors at AUC,” said Soraya Bahgat, who took a class with Shahin in 2005. “This is a man who has so many students with so many fond recollections of his teachings. He was a patriot… and he inspired us tremendously.” Shahin won an award at the university for his teaching.

In a statement published online, Shahin said he is facing charges of “grand espionage” and leading an illegal organization, among other accusations.

“I categorically and emphatically deny all the charges, and I challenge the State Security Prosecutor to present real evidence to substantiate these fabricated charges,” he said in the statement. “I am an academic and have been independent throughout my life. I am an advocate for democracy, the rule of law, human rights, and a fervent supporter of the main objectives of the January 25 Revolution in Egypt, namely freedom, dignity, and social justice.”

Shahin is a public policy professor at the American University in Cairo and is not a member of the Muslim Brotherhood, which the Egyptian government has sought to crush since last summer. He previously served as a visiting associate professor at Harvard University and was a faculty affiliate at Harvard’s Kennedy School of Government. He has taught at the University of Notre Dame, is a prolific author and is currently editor-in-chief of The Oxford Encyclopedia of Islam and Politics.

“If writing about, in a scholarly manner or in the manner of a public intellectual, about Islamist politics and political Islam is enough to get you charged with espionage these days in Egypt, it shows just how bad things have gotten,” said Joe Stork, deputy director of Human Rights Watch’s Middle East and North Africa division. “It’s hard to remember when this was the case even if you go back to the days of Hosni Mubarak and certainly the latter decade or so of Hosni Mubarak’s rule.”

“This is flabbergasting,” Stork said. “I had to reach for that kind of vocabulary to characterize it.”

In a statement sent by e-mail to Al-Fanar Media, the American University in Cairo said that while it is unable to comment on specific legal cases, the university reaffirms its strong belief in the principle of freedom of expression.

“The university neither endorses nor condemns specific beliefs or judgments of members of its community but we strongly defend their right to hold and express such views,” the statement said.

The charges against Shahin come amid an intensifying effort to quell political dissent that has extended to Egypt’s academics and students. (See a related article “New Home for Egyptian Academics: Jail”.)

A political scientist, Amr Hamzawy, a liberal figure, is among 26 defendants facing trial for insulting the judiciary. The charge is linked to a comment he made on Twitter, according to Egypt’s state news agency MENA. Morsi and other Islamists are also being charged in the case.

“Egypt now has taken legal action against two of its best political scientists, Amr Hamzawy and Emad Shahin,” said Shadi Hamid, a fellow at the Saban Center for Middle East Policy at Brookings, on Twitter. “The absurdity knows no bounds.”

“Charges against Hamzawy and Shahin are yet more evidence that this is a different kind of autocracy, well beyond what the Mubarak regime did,” he added.

More than 700 students have been arrested since the start of the academic year in September, according to the Cairo-based Association for Freedom of Thought and Expression. Academics have also been jailed.

“It seems like anybody who isn’t sort of completely on board with the agenda of the military-backed government and known to be on board is considered a potential target,” Human Rights Watch’s Stork said.

Meanwhile, Bahgat said she is trying to think of way to organize to support Shahin. “I don’t think we can sit back,” she said. “There are so many students who are outraged.”