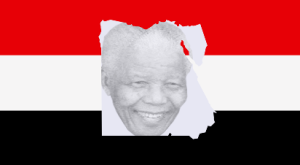 I found out about the passing of Nelson Mandela on Thursday night, then on Friday morning I saw friends on Facebook celebrating Abdel Fattah el-Sisi, the Egyptian army chief, winning a poll to be Time magazine man of the year.

This, I thought, was symptomatic of what is wrong with Egypt today. That we can celebrate Sisi as a person for helping oust president Mohamed Morsi after the June 30 protests, while ignoring the darkness and injustice of the consequences ever since those protests—however much we support them, however unjust the Morsi regime was—does not bode well for Egypt’s future.

Instead, I think—as many do—that it is time to reflect on Mandela’s struggle and journey, and take lessons from him to help Egypt through these difficult times. At least Mandela had some clarity about who his friends were, who his enemies were. In Egypt today, one’s enemies are people who were just yesterday our friends, and suddenly, some of us no longer care about their well-being, their livelihood, their life.

I know little about South African history, but I do believe the atrocities of apartheid were longer and much more sinister than what Egypt went through before 2011 and since. And yet, Mandela’s message was one of forgiving one’s enemy and working towards reconciliation. I do not know how someone who went through what he went through could become what he has become and inspire others to do the same. (A colleague of mine was making such a point just a few days before Mandela’s death.) There is no clear line dividing Egyptians to the point of irreconcilable differences, and yet we are unable to work with each other and are turning against one another. We have done to ourselves what Paulo Freire has warned against: He warned that the oppressed, when given power, may turn back to oppress their oppressors. Understandable though this reaction may be, human though it may be, it only reproduces a cycle of injustice, as has been happening in Egypt for the past few years now.

I would hope all of us find time to look into Mandela’s legacy a little more in these coming days, but for now, I leave you with my thoughts on two quotes by him:

“Education is the most powerful weapon which you can use to change the world.” And by education here, I suspect he does not mean the kind measured by standardized tests (if that even deserves to be termed education) but rather education that seeks to liberate the individual’s mind, helps the person see hidden oppression, and question one’s own beliefs, values and culture, and helps the person take action to challenge the status quo and promote social justice.  This often takes place outside formal education spaces—mainly because formal education is a way for those in power to exert power by maintaining the status quo. For Mandela, it was “the university of the struggle” where he inspired other prison inmates with his approach to revolution, which involved a deep understanding of “the other” and the humanity behind the fears and motivations of others. This seems entirely possible in Egypt. On many levels, I am just not seeing it done.

Another strong statement by Mandela is what he said when recognized in 2006 by Amnesty International as an “ambassador of conscience.” He said that “as long as injustice and inequality persist in our world, none of us can truly rest. We must become stronger still.”

As an educator in Egypt today, I wonder what we can do to promote the spirit of Mandela in our children and youth in order to reach a society that is constructive. I wrote this summer about the importance of infusing empathy and social justice into our goals of developing critical citizens. I now want to add that such an approach might manifest itself in the action or process of forgiveness that Mandela’s legacy can teach us: Conflict resolution, peace education, citizenship education. We know there are groups in Egypt working on this outside formal education. It is time to expand the reach so that larger portions of the population are able to understand one another empathetically, and to be willing to forgive—but not forget, or else we do not learn, but we can unlearn and relearn—and move forward.

Maha Bali thanks her colleagues Nelly Corbel, Gihan Osman and Heather Browne for conversations that influenced the thinking behind this article.