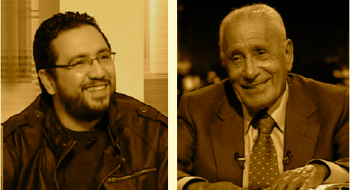 If the corruption, weakness or deterioration of the media’s standards in Egypt bother you, always search for the faculties of mass communication, which graduate those journalists in our country.

That was an early lesson I learned from the most important and most prominent pioneer of Arabic journalism, Mohamed Hassanein Heikal, when I went to interview him 14 years ago. I was surprised when he required that we sit and get acquainted first before the interview, so that there would be no awkwardness between us while doing the interview. I learned later that this was one of Mr. Heikal’s prerequisites for accepting any interviews he does, so that he could apologize and back out from the interview if he didn’t like the interviewer or observed any hostility. In addition, Heikal got the high status that he had because he was a careful listener, and his status then made people want to listen to him.

When Heikal found out at the beginning of the interview that I had graduated from the Faculty of Mass Communication in Cairo University three years before my meeting with him, his eyes glowed with interest, and he asked me to tell him in detail what I had studied in the faculty… its curriculum… its most prominent professors. When he noticed my astonishment, he told me details through which I learned that his interest in the Faculty of Mass Communication had roots that were older than what I had imagined. After he became Egypt’s Minister of Information in 1970, he asked Dr Abdallah Almalek Ouda to prepare for him the educational curriculum of mass communication in the Egyptian university.

“I was stunned when I saw that curriculum was designed to fit a ‘secretarial editor’ in its old sense,” he said.

“The curriculum was just developing rigidity. It didn’t even teach how to assemble news using the modern concept. Admittedly there was a relatively good role for professors like Khalil Sabat. But the comparison between this curriculum and the journalism curriculum in Columbia University, where I have been and still am in touch with, was shameful,” he added.

“I tried to adjust the curriculum, but my efforts were cut after I was out of the ministry. Tell me, how is the study of journalism doing now?” he asked me.

I didn’t know how to answer him. Should I lie and say that everything was okay? Or should I exaggerate and say that it was disastrous?

I don’t want to repeat here all that I have written about this topic. It is enough to summarize that the crises of the departments of journalism and mass communication are part of the crises of universities in Egypt, a country that has transformed to be a place where most of the professors seek financial stability by any means even if it’s through groveling for security, suppression of freedom of thought and molding students. It’s transformed to a place where most of the students seek a certificate or a diploma to add on to their existing “wasta” and  connections. And the crisis in studying journalism is exactly like the position of Egyptian journalism itself. There are some bright points, but they seem like white marks on an old scruffy black dress.

He ignored my traditional metaphor to say that what he has heard from me has added to his worries about the future of the Egyptian journalism, and has also revealed to him some of the features that confused him in Egyptian journalism.

I didn’t know back then that behind all Heikal’s questions about the smallest details of studying journalism in Egypt, was a growing interest in his mind of the importance of finding an alternative to raise the professional standard of young journalists. If those journalists managed to escape from the hollowness of the curricula and the weakness of the professors—who are mostly employed according to their efficiency in memorizing, staying away from trouble, and having files that are clear of any political activities or opposing positions—they will not escape from the disasters of journalism practice.

If Heikal failed to achieve his dream of amending the curricula for mass communication when he was in power [as a minister of information], here he is now after becoming a parallel public authority translating his dream in a great organization, which he created, Heikal’s Insitution of Arab Journalism. If the distinct activities of that institution are meant to be communicated and accumulated, perhaps they would change the face of Egyptian journalism entirely, after it had faded black by the hands of many amongst which are some of Heikal’s students who have plundered corruption into journalism (I won’t name them. You probably know them).

That morning Heikal was talking enthusiastically about his experience in communicating with the world, a matter that is indispensible for any young journalist in order to provide his readers with a service like the one provided by the developed countries’ newspapers.

During his conversation, I asked my ill-advised self what would be his comment if I told him that I had borrowed 100 Egyptian pounds the day before in order to buy a new t-shirt to wear it to this interview. Ignore that. Should I tell him that most of the journalists I know are dreaming of fixing the broken telephone lines in their offices just so they can communicate with their local sources, let alone communicating with the world? Let’s assume he did not sympathize with my talk, and decided to pursue his talk about the experience of his generation that was not hindered by the difficulties of life such as digging into the rocks with their nails, isn’t it weird that his conversation takes a turn and he asks me how much an egg costs these days? And how the ticket officer on the bus used to call out to the passengers very politely saying “Tickets gentlemen?” Should I tell him about my fight with the driver of the taxi that I chose to take so as to arrive on time for our appointment to maintain my image? No need to shock the old man with these issues. I will just keep silent and pretend that I agree with his words. That is better and more fitting.

Heikal stopped to point to a rack of books right behind his desk. It had the books in English, which he kept separate from his Arabic books. “To make sure I have not wasted my time in life,” he said.

I kept inside myself the question about whether this was unfair for his books authored in Arabic. I preferred to tell him that I am thinking of giving him the copies I have of his books, which have been roaming among hundreds of journalists, who have each written what they think in the margins, so he can make another rack for them. This rack would be strong proof that he hasn’t ever wasted his time in life.

He didn’t give in to my interruption and continued to ascertain the importance of mastering foreign languages for a young journalist. “When you master a foreign language, you will discover that a lot of what you read that is authored in Arabic is actually translated and translated badly too…in addition to that, translated books cannot copy the civilization and culture well.”

I said to myself: There you go. The introductory session transformed into a session of stirring woes. Heikal noticed my escalating feelings towards what he was saying, so he changed the subject. Now I understand why he chooses from the start that you sit on a chair across from his desk, considering this more intimate, whereas I saw it as a matter that raises perplexity. Then I linked it to his everlasting desire to understand the feelings of his companion that are drawn on the visitor’s face.

A while after our meeting, which I can credit for convincing me to leave the journalism profession and chase my dream of becoming a script writer, I started to follow the news of the institution established by Mr Heikal to train and develop a chosen league of young journalists. I know that a lot of those who participated in the events of the institutions have indeed benefited. But the state of our journalism has not improved, and it still suffers from problems of weak professionalism, lack of efficiency, and little credibility.  This is because the Egyptian proverb “What would a brush do to an ugly face” still applies despite the incredible development of the beauty experts. You can still temporarily beautify an ugly face, but you can never permanently beautify an ugly reality. And that’s why those who want to reform our deteriorating journalism and media reality, have to stop trying to beautify and patch, and treat the underlying root of the problem in the faculties of mass communication, their weak curricula, and their devastating method of teaching.