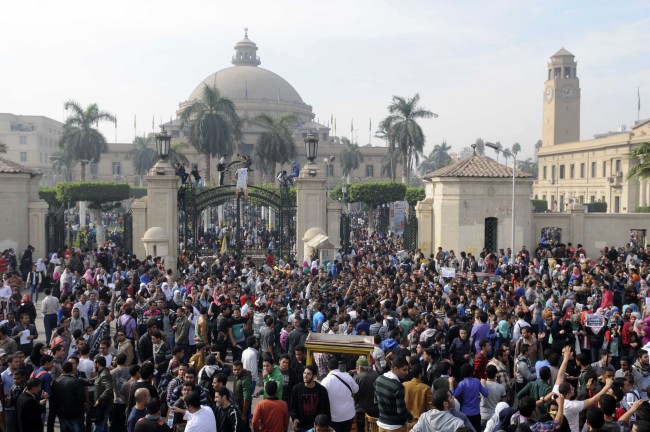 “You can rebel, oppose, bully, and demonstrate, but only when we want you to.” That was the message sent by the “deep state” authorities to hundreds of thousands of Egyptian students via the government media and their allies, which are called private media. But in reality these media outlets represent the interests of a number of businessmen who do not turn down any demand by the authorities, so that in turn the authorities would not turn down any of their demands.

At the same time last year, after the outburst of revolutionary protests against the authoritarian constitutional declaration issued by the Muslim-Brotherhood-affiliated president, Mohamed Morsi, all newspapers and talk shows were praising the role of the student movement in resisting the Muslim Brotherhood’s authoritarian desires. They considered the student-movement protests an extension of the honorable student tradition of resisting tyranny, and warned the security authorities against suppressing the student’s great demonstrations. The media also stood against any Brotherhood demands to bring back the university security inside the Egyptian universities’ campuses, after it had been outcast by a historical judicial decree.

It is not strange anymore that you are accused of being a member of the Brotherhood just to shut you up, even if you had strongly opposed the Brotherhood during their rule, and even before when they were loyal allies to the security authorities. That is why, no one cares much about the truth that many of those student demonstrations have not gone out to support the demands of the Brotherhood of bringing back their president who was over thrown by a public revolutionary wave. They have actually gone out to condemn the security-forces crackdown on student demonstrations, which has also resulted in killing a student from the engineering faculty, named Mohamed Reda.

Belal Fadl is an Egyptian screenwriter and columnist.

Despite the media trying to make the murder look as if it is a Brotherhood conspiracy, students have revolted in grief over Reda, because he wasn’t even participating in the demonstration. Reda was actually walking out of a lecture. This has actually given the impression to thousands of students that each one of them could be a target for random oppression, especially with the blessings to the police practices given by the minster of higher education, Hossam Eissa, despite the fact that he is coming from the lines of the Nasser opposition that has always blessed student demonstrations without any constraint or condition.

In Al-Azhar University, the condition was even worse, because the murder of a student, Abdel Ghany Hamouda, who was killed by police shots after lying on the ground suffocating from tear gas, has not gained any media attention. The spotlight was only shed on the student riots at the university that is witnessing an influence of those affiliated to the Brotherhood group and those sympathizing with the group. So this act of ignoring the incident by the media, has led to more escalation by the students of the university to grab attention, but all in vain.

Unfortunately Egypt is not suffering from the abundance of the number of politicians present inside the decision-making centers, but it suffers greatly in the lack of politics practiced in a complicated case like the one of the student movement. At the same time we do have politicians who are old enough to remember that no Egyptian ruler, no matter how strong he was in oppressing student movements, has ever succeeded.

We are not just talking about presidents who have ruled Egypt during the liberal era, like Mohamed Mahmoud, and Ismail Sidky, both of whom had clashes with students that were enough to wipe away all of their economic achievements, and throw them off the ruling throne. We are also talking about Gamal Abdel Nasser, the most popular Egyptian leader who did not know how to deal with student demonstrations following the defeat of 5th of June 1967, which have called for the prosecution of the real perpetrators of the defeat, instead of blaming the small leaders. Nasser however surrendered to the students’ anger and issued some bold decisions, which sucked their anger out of them and ended their presence in the streets.

But today, while the state authorities seem glowing with public support, they are pushing the perspective of what is referred to as “the war on terrorism;” they have shown extreme confusion in facing the student demonstrations, which they were unable to crack down on with either thick police sticks, or the fire tongues of the talk shows. Even when they bet on the collusion of the professors of Cairo University, the biggest Egyptian university, they were surprised to see the bold position of the dean of the university who has never been famous for taking opposition stances before. In spite of that, he and the university teaching staff strongly condemned what the police did. This was followed by an even bolder action taken by the dean of faculty of engineering who resigned for failing to protect the students from the brutality of the security authorities.

By these actions, the cover that the government has been using as an excuse to suppress student demonstrations has been removed. There are now more calls for political solutions to solve the issue with the students. The situation has reached a state such that many of the writers who are affiliated to the security authorities started to blame the current government, accusing it of making up a political issue that serves the interest of the Muslim Brotherhood. This comes after they had, until a recent time, accused it of failing to make solid policies that control the students taking the streets.

What the country officials do not realize is that any attempt to control the student movement will never succeed unless if it comes from realizing that everything that is happening is nothing but part of the struggle between the young generations with the “old” imagination-poor generation. It is the struggle, which started to explode starting 25th of January 2011 with its successive rounds. And as long as a comprehensive formula to absorb the anger of the young generation and transform it into an energy that serves the country has not been found, then any relative calmness will be followed by repetitive eruptions inside and outside the universities. Whoever doubts that has to remember well the graffiti slogan what was written on the walls by the youth, and which the older generation has not read carefully. This slogan says “If you will not let us dream, we will not let you sleep.”