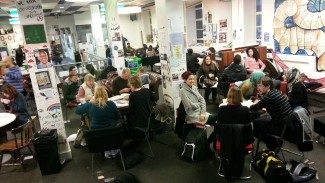 Lounge at the School of Oriental and African Studies. (Mohamed Elmeshad)

The hunger of Arab students for a quality education often drives them out of the region, and more and more they are going to Canada and the United States, and avoiding other English-speaking destinations.

Interest in the United Kingdom is tepid, and interest in Australia, long an aggressive recruiter of foreign students, has dropped sharply, according to an analysis of numbers released by various agencies and interviews with students themselves.

“I can see why more students are coming,” said 30-year-old Abdullah Haidar, a doctoral student from Saudi Arabia at George Mason University. “We no longer have a fear of being deported or not having the visa renewed.”

“The U.S. has the best universities in the world,” he added. “You don’t even need to justify wanting to study here.”

According to a 2011 Migration Policy Institute study, U.S. immigration has eased strict post-9/11 policies, such as one that subjected students from 17 countries, predominantly Arab and Muslim, to enhanced screening. “The proportion of U.S. institutions that reported any sort of visa applications/hurdles for international students (from all countries, not just the MENA region) has gone down substantially from past years,” said Rajika Bhandari, director of the Center for Academic Mobility Research at the International institute of Education.

The change is a welcome one for Arab students. “The opportunity for high-level practical problem solving, teamwork and networking is something I could not get back home,” said Mohamed El-Afifi a 29 year-old Egyptian and a recent graduate of Georgetown’s MBA program. Afifi, who was dissuaded from applying to the United States in 2002 because of “visa horror stories,” was happy to enroll at a U.S. institution. “With all of the turmoil in Egypt, it was a good chance for me to step back and study,” he said.

The MENA region only has a handful of the world’s top 500 universities, so students looking for opportunities to study at the best universities often look elsewhere. In Saudi Arabia, students are often encouraged to look outside of the their own country by the government itself. The King Abdullah Scholarship Program, a government-supported set of scholarships, is by far the most expansive such fund available in any Arab country.

Kuwait, with its high per capita income, is second to Saudi sending students to the United States, the United Kingdom, and Australia. Egypt, with its large if not always wealthy population, usually comes in third with Qatar, Jordan and the United Arab Emirates not far behind. The Emirates, which have been building higher education by importing franchises—branch campuses—from the West, still send a large relative proportion of nationals to study abroad.

The Middle East’s share of students grew 26 percent. Only Algeria, Lebanon and Palestine experienced a decline in enrollment over the 2011/2012 school year. Egypt, Iraq, Oman, Qatar and Yemen all sent over 15 percent more students to the United States in the 2011/12 academic year than in the previous year.

Zainab Malik, a research manager at Education Intelligence, an arm of the British Council that analyzes trends in international education, said that Middle Eastern students are unusual among international students in listing the “cultural experience” of living abroad as one of their top three reasons for studying outside of their own region. (Their other two reasons are their search for a better quality education and broadening their career prospects.)

Canada has been consistently attracting more Arab students every year for more than a decade now. For the United Kingdom and Australia, availability of scholarships and immigration policy will likely determine if they can go back to attracting high numbers of students as they did at the beginning of the past decade.

The United Kingdom, the world’s second largest destination for international students, experienced its first-ever net decrease (0.4 percent) of new first-year students from international, non-European Union students in the 2011/2012 academic year (the last year for which statistics on international student enrollment is available). Saudi enrollment alone went down for the first time in over a decade by 4 percent over the previous year.

On 10 October, the UK National Immigration Service introduced an immigration bill tightening checks on international students and increasing their contributions to National Health Insurance. “It is baffling when you consider that (the government) has only recently announced that it wants to expand international student numbers by 90,000 over the next five years,” said Daniel Stevens, the International Students Officer for the National Union of Students.

The Arab students who make it past the U.K. Border Agency say they enjoy the academic setting. “The global scope of my studies here and the metropolitan nature of London have made my degree from London more meaningful,” said Mohammed Ayyad, a Palestinian student at the School of Oriental and African Studies.

According to Malik’s research at Education Intelligence, while the number of MENA students in the United Kingdom plateaued last year, British enrollments in will be on the rise again this year and the next, along with those of the United States. Higher-education enrollments worldwide will not rise as quickly over the next 10 years as a result of slowing economies, shifting labor markets and expanded provisions at local universities and career centers, according to Education Intelligence research.

Australia is at the bottom of the international-student market, experiencing a sharp drop. Since 2010, the number of international students has decreased by almost 50 percent to around 415,000 according to figures from Australian Education International. MENA students have similarly decreased by nearly 58 percent. The rise in the Australian dollar, said Ryan Goh, regional marketing manager at the University of Queensland’s International Education Services, may have affected the decision to choose Australia as a study destination.

The number of MENA students is relatively small in Australia at around 14,000. A good deal of the decline is the result of the Saudi government’s decision to exclude Australia from the government scholarship program recently, according to Goh.

But some Arab students are happy there. “There was research and experimental opportunities that I didn’t get in Egypt, and found plenty of in Australia,” said Taha Roushdy, a recent recipient of two master’s degrees in engineering and biomedical engineering at the University of Western Sydney. “It’s also heaven for outdoorsmen,” he added.

According to Education Intelligence, the trend over the next decade will be increased globalization of studying, but with the increases moving at a slower pace. Education Intelligence research predicts that by 2024, 50 percent of the world’s university-aged youth (18-22) will be living in the United States, China and India. Middle Eastern students are likely be a part of that trend.

This article is one of a series looking at Arab student mobility.