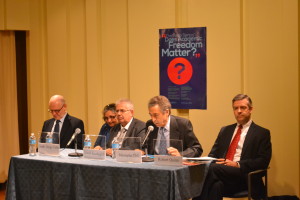 NEW YORK—The poster behind the panel discussion asked “Does Academic Freedom Matter?” To some, it must have seemed an obvious question, with only one answer. But to one professor addressing the crowd of 30 at New York University in Manhattan Monday night, it is a matter of life and death.

Habib Kazdaghli, dean of the faculty of arts, letters, and humanities, at the University of Manouba in Tunis, has been in the crosshairs of Islamist extremists since shortly after the 2011 elections in Tunisia, the first democratic elections after the round of Arab uprisings that began in 2010 and 2011.

After the Tunisian elections, he said, hard-line religious groups saw the opportunity to impose their views of how universities should be managed. “For over a month I wasn’t allowed into my own office. Eight thousand students were also prevented from attending their classes.”And the new government seemed to be identifying with those groups.

In introducing Kazdaghli, Mustapha Tlili, founder and director of the New York University Center for Dialogues, noted that he remains under police protection 24 hours a day, because of death threats from Islamist extremists. One of Kazdaghli’s lawyers, Chokri Belaid, who was also a well-known opposition figure, was murdered in January. The dean told TheAtlantic.com that a Facebook page of the Salafists listed him as “number two on the list of people to be assassinated.”

At the university, Salafists have pushed to require women to wear veils that obscure their faces, and want classes to be segregated by gender, as Al-Fanar Media reported earlier. Kazdaghli, who opposes those demands, was acquitted in a ten-month trial over accusations that he had slapped one of two veiled women who ransacked his office, an offense that carried a five-year prison term. The women were found guilty.

“However, because the judiciary is not independent,” he said, “the case was appealed.” He must appear in court again next week.

In New York, the panel included Ambassador Serge Telle, the French Interministerial Delegate for the Mediterranean, and Robert Quinn, the executive director of Scholars at Risk. Together with the Center for Dialogues, Scholars at Risk in February sponsored a conference, “The University and the Nation: Safeguarding Higher Education in Tunisia and Beyond,” at the University of Manouba, and the groups released a report from that conference Monday evening.

The report concluded that “Great nations need great universities,” and recommended that the Arab states “recognize their primary responsibility for protecting higher-education communities and their members from attack” and work to prevent future attacks, by investigating and prosecuting those that have already occurred, and by guaranteeing academic freedom in constitutions and laws.

The recommendations urged all those in higher education, including scholars and students, to respect the autonomy and academic freedom of universities, and to promote universities as non-partisan, non-sectarian, and non-ideological. Universities must be defended against violence, coercion, and intimidation, the report said. It urged university leaders, members of the public, and others to keep issues of academic freedom in the spotlight, through further conversations and conferences.

Tlili noted that Moncef Marzouki, the provisional president of Tunisia today, had at one time been under the protection of  Scholars at Risk, and was urged to protect Kazdaghli. The president, said Tlili, “should do something, because he knows what it means to be under threat.”

Telle, the ambassador, said the roots of universities can be traced to ninth-century Arab philosophers and scientists, who instituted Houses of Knowledge, great libraries that put all that was known at the time in one place.

“Unfortunately, it is far away in the Arab world,” he said. “Houses of Knowledge are still to be reinvented.” And it is necessary, he said, to keep religious and political considerations separate from universities.

The safety of the wider society is at stake in such conflicts, according to Tlili. “The same groups that threatened the university were threatening other groups, like journalists,” he said, adding that members of the Tunisian army had been assassinated. “In September, the same groups attacked the U.S. embassy in Tunis. So when you are hesitant to protect academic freedoms, you are subjecting the society at large to dangers,” he said. “Leniency vis a vis what was going on in the university has complicated matters in the national level, in society at large.”

Quinn said that for an American audience that often takes academic freedom for granted, it could be hard to appreciate the need to protect such rights.

“How many of us at this moment have any nervousness at all that what is said here tonight could cause you to be arrested or prosecuted,” he said, “or have any physical harm come to you from participating? But that’s the reality that Dean Kazdaghli lives with, physical intimidation, violence, simply for trying to have a conversation, research, publish, write, and teach.”

“As an expression of solidarity, we as the higher-education sector itself join together to defend this space.”